This single carriageway section of the A120 is regularly very busy and there have long been calls for it to be improved, as the section between the M11 and Braintree was in the early 2000s.

ECC has worked up and consulted on its favoured route to "create a modern dual carriageway link connecting Braintree and the A12" to recommend to Highways England.

Given that the proposed route bypasses the current A120, there should be scope for improving provision for cyclists and pedestrians both along the new road and along the newly de-prioritised `old'-A120, especially around Marks Tey and its station.

Construction is currently slated for 2023-6. 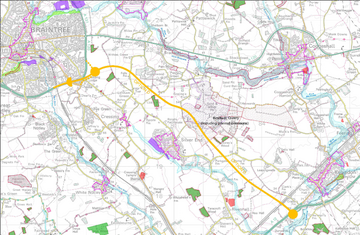